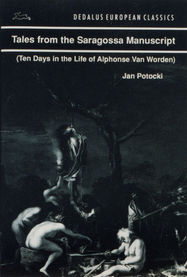 Tales from the Saragossa Manuscript

As a reader you find yourself teased, intrigued and disorientated. You never quite know where you are - whether you are reading a series of lies, illusions and superstitious tales, or whether this is a great work of art with its own special kind of truth. Although the book clearly has roots in medieval forms, it is also amazingly modern - predating the works of Italo Calvino and the Magical Realists by at least 150 years, and, incidentally, making them look rather tame. The English translation by Christine Donougher is a model of clarity and quiet elegance.

Bizarre, relentlessly inventive and decidedly not a novel. It is more a textbook of crazy magic.

A masterpiece of French Literature which is one of the all time great works of fantasy; one of those rare books which invigorates and nourishes the human spirit and the dignity of man.

A work of magical intricacy which carries the torch of fantasy into our own century. The baffled Alphonse is a precursor of the Kafka hero or the automata of the nouveau roman.

A marvel of elegant storytelling that uses exotic settings to lure the reader into accepting impossible events. One of the true masterpieces of fantasy.