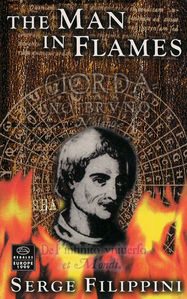 The Man in Flames

Filippini's engaging historical novel was first published in 1990, in France, to understandably great acclaim. The story concerns renaissance philosopher Giordano Bruno's marginalized life as a cantankerous freethinker and impenitent homosexual, as recalled by Giordano himself shortly before he is to be burned at the stake by the Inquisition. It's a lively and likable performance, distinguished by convincingly replete period detail and vigorous portrayals of such luminaries as Johannes Kepler, Tycho Brahe, second-rate Elizabethan poet Fulke Greville, Sir Philip Sidney's (doubtless fictional) elder brother Cecil, who's the love of Giordano's life - and a sharp-witted young charmer, who'll later take the name of William Shakespeare. A fascinating novel.

A fiction based on the life of a real person is always a difficult reconstruction, but Filippini succeeds in evoking the tense atmosphere of the period as well as the intellectual dilemmas and emotional traumas. His descriptions of sexual brutality are as finely observed as the lyrical passages of homosexual love.

Tariq Ali in The Financial Times

Dedalus are well known for publishing wonderfully decadent novels and The Man in Flames is no exception. Excellently translated from the French by Liz Nash, this is the tale, set in the sixteenth century, of philosopher and poet Giordano Bruno - excommunicated by the Pope, wanted by the Inquisition and loved by the wily, elegant Cecil.Not only is it a romp of the first order, it is also a stimulating account of the tyranny of the Church over anyone who believed in and attempted to promote freedom of speech. Another Dedalus classic.