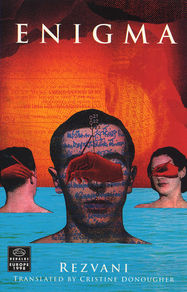 Written by a man with a name like a stage magician's, this is a mystery about a crime at sea. The literary Knigh family has left its abandoned yacht drifting, and gruesome signs suggest they have drowned.What happened? Did someone climb back on board while they were all swimming, pull up the ladder, and later kill himself as well? The case is investigated by the Poet Criminologist and the Literary Expert, largely by detailed reading of the family's various works-in-progress. It all shapes up like an interesting inside-out version of the traditional locked room murder mystery.

A young man is bet that he won't plant a sword at midnight in a grave that was dug at midday. His friends accompany him to the gates of the graveyard. When he hasn't reappeared by daybreak, they go in and find him dead, kneeling on the still-fresh grave. He has died of fright. And now the whole Knigh family, every member of which was a writer, has been found drowned off Karl's yacht. Stories within stories, the relationship between literature and life, the literary critic as detective: out of such upredictable materials, Rezvani has written a highly entertaining mystery story that is winning even as its stagiest.

Will Hobson in The Observer

Crammed with references to classic fiction and written almost entirely in dialogue, Rezvani's philosophical detective story is an exploration of literature itself. Very brainy.