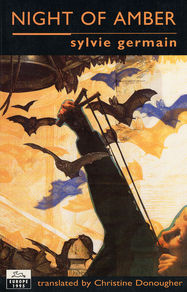 There is little that can be said that would do justice to the controlled brilliance of Sylvie Germain's writings - Night of Amber is a fantastic book, a wildly inventive novel about childhood, death, war and much else. It creates a rich fantasy world, yet it is also very moving, and deals with the emotions of grief and love with an understanding and insight which few writers can match.

Edward Platt in The Sunday Times

Germain's sequel to her prize-winning first novel, The Book of Nights, follows her anti-hero Charles-Victor Peniel on his hate-filled journey through life. It sings with a strange poetry, pitting politics (the Algerian war and May '68) against the vagaries of individual minds.

Ian Critchley in The Daily Telegraph