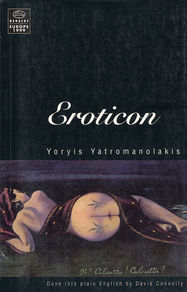 A very amusing (and imperturbably retrograde) imitation of the classical oriental love manual from a celebrated contemporary Greek novelist whose casual sexism is obviously calculated to elicit strong reaction. Its straightforward categorization of the 'five types of women' available for seduction will surely offend: then again, where else are you likely to learn how 'the spotted eels of the South Seas' laboriously copulate? Advice on sexual strategies and positions is helpfully interspersed throughout by an ingenious narrator whose grave and reverend, and studiously cumcumlocutious, lewdness nostalgically evokes the worlds, and words, of Rabelais and Boccaccio. Urbane, provocative and highly (as well as lowly) entertaining.

Kevin McGrath in The Harvard Review