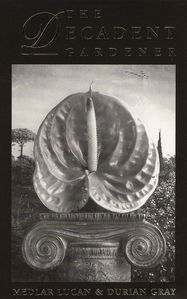 For the jaded gardener who has seen it, done it and mulched it all, is The Decadent Gardener. Lucan & Gray have been called in by Mrs Gordon to redesign the Mountcullen acres. The book describes and explains their ambitious plans for the estate. A cruel, synthetic and fatal garden are only the first of their transformations. As with their previous book, The Decadent Cookbook, the authors reveal that there is a dark side to an activity widely thought to be the preserve only of ladies in sensible shoes.

You may remember the authors previous work, The Decadent Cookbook, highly recommended in these pages. This time, they have done even better: they must have done, for under normal circumstances my interest in gardening is not even detectable at quantum level, yet here they enthrall. Plans for sinister, corrupting gardens, planted with poisonous plants such as Hellebore, Hemlock and Meadow Saffron. Contains the full text of Rochester's play Sodom - for production in the garden theatre, of course - itself an uncanny prolepsis of contemporary fears about Aids. The only gardening book you will ever need.

Travel into the dark side of the most suburban and safe activity. Ignoring the ponces in green wellies and old women with rubber kneelers and trays of marigolds, Lucan & Gray concentrate instead on such green fingered fuck-ups as the Emperor Nero, Cardinal Richlieu, the Earl of Rochester and the even more bizarre sex and death, decay and daisies world of the Chinese emperors. Free cutting: 'Small fragments of human flesh, caught by whips and leather lashes, had flown here and there onto the tops of petals and leaves'.

...subversion and perversion at first seem inimical to a fresh-air culture of allotments, hanging baskets and compost heaps. Yet, as this bizarre and often shocking book makes clear, vices of all sort lurk among the mixed herbaceous borders and nature is not always a pretty sight. Lewd, cruel and sometimes very witty, it is more a manual for those gardeners who would rather offend than impress their neighbours.

James Ferguson in The Oxford Times

Lucan and Gray trawl the murky depths of cruel and mad kings, kinky writers and eccentric little-known deviants of all kind. In vanished gardens, real or imagined, they trace every decadent inflection.

Book of the Month in Attitude Magazine

There is an odd,subversive book called The Decadent Gardener by Medlar Lucan and Durian Gray. The introduction describes the decadent gardening ethos thus:'In the garden, the decadent seeks to create a moment of beauty, which should be allowed to fall into decay and ruin.'Gardening,Lucan and Gray believe, is 'little more than systematic violence in pursuit of beauty', and the gardener is first and foremost a sadist. These two, the Kropotkin and De Sade of horticulture, understand that'nowhere are sex and death more intimately bound together than in the garden.' For them the garden is a place of 'agony, self-doubt and betrayal.' They remind us that, if we are to believe the Bible - not that they would be inclined to - the first murder was carried out by a gardener.And the first garden was a place where sin beckoned wherever you turned.The book abounds with piercing, pricking truths.The flower, they remind us, for example, is nothing but a sexual organ.The Decadent Garden consists of the plans for a series of thematic gardens that Lucan and Gray had conceived for a wealthy patroness. Each garden would symbolise an aspect of nature as they saw it. The Cruel Garden would consist largely of impenetrable thickets of thorns.The Fatal Garden would contain only representatives of the vegetable world's many poisonous denizens:among them, black bryony, dropwort and , of course, deadly nightshade.In the Narcotic Garden, by the side of the opium poppy and cannabis sativa, would grow more obscure mind-altering plants such as mandrake, henbane and thornapple. The Priapic Garden would be populated by those species whose flowers and foliage assumed the most suggestive phallic and vulvic shapes.Their Torture Garden carried the libertine ideas of Lucan and Gray furthest and is perhaps best left to the reader's imagination.Because Lucan and Gray barely realised their designs(they were too decadent to bother), their gardens flourish mainly in the mind.

Simon Busch in The Guardian