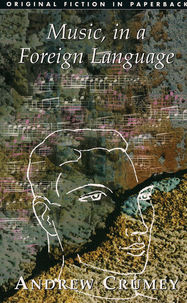 An intriguing and illuminating post-modern meditation on betrayal, death, and paths not taken, both personal and historical. Employing fiction within a fiction, Crumey constructs a philosophical jigsaw puzzle, partly a portrayal of an alternative, Eastern European-style post-war Britain, partly the story of the exiled narrator's life and of the characters in the novel he's writing. A promising debut from a talented and unusual writer.

Scotsman's Books of the Year

The strikingly inventive structure of this novel allows the author to explore the similarities between fictions and history. At any point, there are infinite possibilities for the way the story, a life, or the history of the world might progress. The whole work is enjoyably unpredictable, and poses profound questions about the issues of motivation, choice and morality.

A writer more interested in inheriting the mantle of Perec and Kundera than Amis and Drabble. Like much of the most interesting British fiction around at the moment, Music, in a Foreign Language is being published in paperback by a small independent publishing house, giving hope that a tentative but long
overdue counter-attack is being mounted on the indelible conservatism of the modern English novel.With this novel he has begun his own small stand against cultural mediocrity, and to set himself up, like his hero, as ' a refugee from drabness. From tinned peas, and rain.'

Music in a Foreign Language used the brilliant conceit of a Britain just
emerging from 40 years of polite Stalinism as a platform for some glittering intellectual fireworks.

This intricate, demanding story of political and personal commitment and betrayal introduces a young master of postmodernist irony who will remind many readers of the brainier postwar European novelists. A formidable debut, from a writer whose possibilities, so to speak, seem virtually unlimited.

Watch Andrew Crumey, whose very different Music in a Foreign Language handled real intricacies of time and ideas with astonishing maturity in a haunting, low-key up-date of 1984.

Douglas Gifford in The Scotsman's Books of the Year

This re-issue of Crumey's Saltire First Book winning novel introduces many of the themes that have come to typify his work: a dazzling postmodernist sensibility, with all the attendant love of games, paradoxes and sly jokes, aligned with a cuttingly humane sense of the ineffability of some emotions: love, sorrow, betrayal. Set in a parallel, post-Communist Britain, the story of physicist Charles and historian Robert, and their author, signals that nothing can be taken on trust by beginning with Chapter 0. From then on in, it's a play of ideas with frighteningly high stakes.

Two people meet on a train: the young man is imagining a novel, and imagining the life of the young woman. A waiter rushes out to find a girl he fancied who hasn't paid her bill, only to find a diary in which their fictitious flirtation is anatomised. But the story actually begins with a man taking a leak after making love to his wife. He has the inklings of a novel, but thoughts will keep intruding, with all their seductive possibilities. The man on the train is living in an England that has decided, with characteristic diffidence and lack of fuss, that it no longer wants to live under a totalitarian regime which has lasted for 40 years. I say totalitarian, but think more of Brazil, a world of terribly genial tyranny, where officialdom tries so hard to be accommodating. And Duncan has another story, one prompted by the memory of his father's car crashing down a slope. As with all good postmodernist novels, the endless digressions are more soothing than jarring.

Set in and around the tight-knit scientific community at Cambridge, this offbeat thriller is a refreshing mix of action and philosophical searching. We see in our protagonist, Charles King, a touch of Kundera's Unbearable Lightness of Being, as King's absorbed detachment is both interesting and unnerving. The plot's mystery centres on King’s character, who appears on the surface to be quite ordinary. Crumey takes us on a wild ride through his imagination in this daring and exciting crafted novel. The reader's perceptions: distorted as the narrative leaps through time; energetic and intriguing characters dodge suspicious authorities in a Britain whose totalitarian stance smacks of today's political scene. Jump on the back of this speeding motor car to find out what happens.

For the first forty pages of this novel I had doubts. A wandering introduction
and then a variety of narrative layers - the narrator's thoughts about how his story first came to him, the story itself and then the stories within that story - took a great deal of time to work through. A whole book of this, I thought, and my head is going to turn itself inside out. Thankfully, Crumey lets up in places. At the point where our rambling narrator begins the story proper, that of a young man and a woman who meet by chance on a train, the tale gathers enough pace to propel you through the constant self-reflexivity. When we enter the story within the story - the life of the young man's father-it chugs along very nicely indeed. But it's not really the kind of book that's about pace. It's an intensely philosophical book, toying with big ideas. Like the way in which coincidence and apparently insignificant decisions can determine our fate. Or the infinite number of 'what if's created at each of these moments: alternate realities that might have been. He shows this in grand scale with his setting - a Britain that was invaded by Germany, and eventually went on to become a Communist regime - and in smaller scale with his characters - a missed train leads on to a chance meeting, and then love. By reminding you of the artifice of fiction, he calls into question the truth of history. An inventive structure and big ideas alone don't make a good book. It's to Crumey's credit that he fuses them with strong characters to create a story that's as emotionally involving as it is cerebrally stimulating.

DD in The Leeds Guide