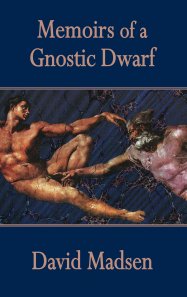 David Madsen's first novel Memoirs of a Gnostic Dwarf opens with a stomach-turning description of the state of Pope Leo's backside. The narrator is a hunchbacked dwarf and it is his job to read aloud from St Augustine while salves and unguents are applied to the Papal posterior. Born of humble stock, and at one time the inmate of a freak show, the dwarf now moves in the highest circles of holy skulduggery and buggery. Madsen's book is essentially a romp, although an unusually erudite one, and his scatological and bloody look at the Renaissance is grotesque, fruity and filthy.

Not your conventional art-historical view of the Renaissance Pope Leo X, usually perceived as supercultivated, if worldly, patron of Raphael and Michelangelo. Here, he's kin to Robert Nye's earthy, lusty personae of Falstaff and Faust, with Rabelasian verve, both scatological and venereal. Strangely shards of gnostic thought emerge from the dwarf's swampish mind. In any case, the narrative of this novel blisters along with a Blackadderish cunning.

Sophie Ratcliffe in The Times

... its main attraction is the vivid tour it offers of Renaissance Italy. From the gutters of Trastevere, via a circus freakshow, all the way to the majestic halls of the Vatican,
it always looks like the real thing. Every character, real or fictional, is pungently drawn, the crowds are as anarchic as a Bruegel painting and the author effortlessly cannons from heartbreaking tragedy to sharp wit, most of it of a bawdy or scatological nature. The whole thing mixes up its sex, violence, religion and art in a very pleasing, wholly credible manner.

Dedalus specialises in fiction that could roughly be classified as gothic or arcane - or indeed gnostic. First published in 1995, this one immediately caught readers' imaginations and has since become something of a contemporary classic. It has a cute frame opening (' It is not necessary for me to relate precisely how these memoirs fell into my hands...' ) and an ugly, if memorable opening proper, reminiscent of the start of Earthly Powers: ' This morning his Holiness summoned me to read from St Augustine, while the physician applied unguents and salves to his suppurating arse...' The rest is freakish couplings, religious sects, torture: a cracking read for all ages, then.

Giles Foden in The Guardian

A pungent historical fiction on a par with Patrick Suskind's Perfume.

Some books make their way by stealth; a buzz develops, a cult is formed. Take Memoirs of a Gnostic Dwarf, published by Dedalus in 1995. The opening paragraphs paint an unforgettable picture of poor portly Leo having unguents applied to his suppurating anus after one too many buggerings from his catamite. Then comes the killer pay off line:" Leo is Pope, after all." You can't not read on after that." I took it on holiday and was transported to the Vatican of the Renaissance; Peppe, the heretical dwarf of the title, became more real than the amiable pair of windsurfers I'd taken with me.

Memoirs of a Gnostic Dwarf was overwhelmingly the most popular choice of Gay Times reviewers in last year's Books of the Year. Reprinted now this outrageous tale of the Renaissance papacy, heretics, circus freaks and sex should be at the top of everyone's 'must read' list.

There are books which, arriving at precisely the right moment, are like life-belts thrown to one when one is in danger of drowning. Such a book for me was Memoirs of a Gnostic Dwarf.

Madsen's narrative moves from hilarity to pathos with meticulous skill leaving the reader stunned and breathless. The evocation of Italy is wonderful with detailed descriptions ranging from political problems to Leo's sexual proclivities. The novel is so hard to place in any definite genre because it straddles so many; historical novel, mystery and erotica - it is simply unique.

Steve Blackburn in The Crack

Madsen's tale of how Peppe becomes the Pope's companion and is forced to choose between his master and his beliefs displays both erudition and a real storyteller's gift.

Erica Wagner in The Times

This is a rigorous and at times horrifying read, with something darker and deeper in store than the camp excess of the opening chapters.

This remains an intriguing novel in which history isn't just alive, it's positively crawling.

LB in The Leeds Guide

David Madsen set about writing a tale true to the Dedalus styling of BUGS (bizarre, unusual, grotesque, surreal) and in the process of crafting this superb tale created an invigorating literary icon in Peppe, upright dwarf amongst men of squat ethical stature.

Something of the nature of David Madsen's debut can be gleaned from the titular tiny narrator's opening declaration: "This morning his Holiness summoned me to read to him from St Augustine, while the physician applied unguents and salves to his suppurating arse." But even that is scant preparation for this riot of torture, odd sex, wrestling, ecclesiastical corruption, twisted philosophy and good, old-fashioned corruption in Madsen's salacious recreation of Renaissance Rome.

First, a warning for anybody easily offended by vulgarity or heresy: this book is shocking...It is a heart-warming yet controversial tale of deformed people, ecclesiastical corruption, sexual perversion and, ultimately, hope in the quest for love.

With a title like that you just have to pick it up off the bookshop shelf, if only to see what it's about. It's about a lot of things, some of them downright bizarre, and if I had to sum it up in just a few words I would have to describe it as a gothic codpiece-ripper.

History has remembered the first of the Medici popes, Leo X, as a man of culture who patronised artists such as Rafael and Michelangelo, began the building of the current St Peter's and was in no small part responsible for the collections of art and manuscripts now contained in the Vatican libraries. But there's a dark side to everything, or so it seems. Leonine Rome is depicted as a city not just of profound corruption, symbolised by the syphilitic arse of the Pope himself, the result of being buggered too often by the young men procured for him from the Roman slums, and displayed by a Pope spread-eagled on his bed with his underpants round his ankles and suffering the indignity of a doctor's diagnostic finger up his fundament, but also of pockets of gnostic heresy which reach into the heart of power and influence within the Church through the presence of Peppe, the Gnostic Dwarf of the title, who is both bosom confidant of and procurer of well-hung young men for His Holiness. The collision of the rarified world of astounding power and wealth which was the Renaissance Papal court with the equally astounding world of back-street vice, brutality and human degradation in which everything and everyone is for sale creates a juxtaposition rather like dropping a bejewelled crown into a public privy. And in this world which is no more than a universal freak show, the Papal court floats majestically on a sea of shit.

Myths of persecution and burning of witches and pagans by the Inquisition are still rife amongst many pagans though in reality it was a rare occurrence. What was not so rare was the burning of heretics, gnostic or otherwise, by the Inquisition. The other thread to this work concerns the deadly feud between the Gnostic Master of Rome and the Inquisitor responsible for the torture and burning of the Master's daughter, and of the terrible and cataclysmic climax to that feud.

Violent, often disturbing, shocking and horrifying, suffused with "the evil that men do" and, in the words of another critic, "fruity and filthy", this is not your average holiday read. It is, however, a truly original and inspired piece of fiction for the reader willing to withstand an assault on his sense of moral certitude. Do not buy it for your grandmother.

David Madsen’s ‘Memoirs of a Gnostic Dwarf’ is a highly peculiar romp about gnosticism that’s more of an excuse to give religion a good rogering, and is shockingly funny.

Faithful to the title, these are indeed the memoirs of Giuseppe (“Peppe”) Amadonelli, a dwarf born in the squalid Trastevere district of Rome in 1478, who grows up to become a chamberlain and confidant of Pope Leo X, while nevertheless at the same time being a devoted adherent of the heresy of Gnosticism. To cut a long story short, Gnosticism holds that the physical world is ruled by Satan, and that we must free ourselves of the flesh to reach God.
Peppe’s position and unorthodox religious views involve him in tragedy and violence that strike both him and others. Spending several years performing a disgusting act nightly in a freak show is perhaps the least of it, while he is inspired by his love for his Gnostic guide Laura and his hatred of the Inquisitor Tommaso della Croce.
In spite of the amount of horror and pain in Peppe’s life, there is a lot of fun in this novel too, even if it is not the “good clean fun” that the Disney comic books used to promise.
The writing is of high quality. Recommended for readers who like an eventful and fascinating read, if they have strong stomachs.