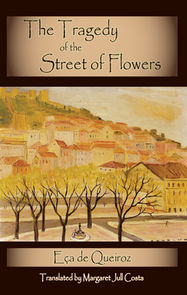 An unexpected bonus: the belated English publication of a work by Portugal's great but little-known novelist, Eca de Queiroz, who died 100 years ago and bears comparison with Balzac and Flaubert. The Tragedy of the Street of Flowers unrolls a fascinating panorama - colour, animated and satirically observed - of 19th-century Portugal, from its mouldering provincial towns to the flashy falsities of the capital.

Peter Kemp in The Sunday Times Books of the Year

Attractive and repellent by turns, Genoveva is a splendid creation who almost achieves stature and sympathy sufficient for tragedy in a novel otherwise suffused with irony and bathos. Through her, Eca anatomises Portuguese society, cutting through its superficial elegance to the inadequacy and insecurity he discerns - with sympathy - underneath. The Tragedy of the Street of Flowers justifies his claim to be numbered among the great European novelists of his day.

One of the greatest novelists of the novel's greatest age, Eca is also amongst the most readable due to his narrative energy, sweeping range and tart sense of humour.

Michael Kerrigan in The Scotsman

A brilliant portrayal of social hypocrisy and sexual fascination.

Narrative pace, fluency and ruthless satire characterises Queiroz's writings. The most frequent object of his satire is the decadence of the bourgeoisie and aristocracy in late 19th-century Lisbon - with all its attendant misery and sacrifice. The darkness of The Tragedy of the Street of Flowers does not, however, preclude wit and caricature. The protagonists are typical of Queiroz's work: the fat libertine who buys his pleasure; the English governess, a stick with more desires than Venus; the maid of a thousand lovers; the aspirant painter who changes his aesthetic more often than his socks; the Anglophile uncle, full of decency, understanding and beliefs cast in iron; the law graduate who aspires to the sentimental and the poetic and whose masterpiece is finally published in a woman's magazine; a high class prostitute with the bearing of royalty. The pressing logic of the plot, the clarity and occasional lyricism of the prose, as well as the mastery of dialogue, make Queiroz a formidable author, so it is more surprising that translations of his books in English are so rare. Huge praise, then, to the publishers for their determination to make available major works that are otherwise neglected in Anglophone countries, and to the translator, Margaret Jull Costa, whose achievement is giving the impression that Queiroz might have written the English himself.

Henry Sheen in The New Statesman

We admire the insatiable appetite for detail which enables the writer to place his protagonists so convincingly, and the unflagging sense of physicality with which social contexts are rendered memorable.

Vitor loves Genoveva, professional mistress to another man, and although each is willing to give up everything for the other, it seems circumstances may keep them apart. A satirical portrait of 19th-century Lisbon society, this novel is cutting without being cruel. Readers will enjoy it for its tone and the strong cast of well-observed secondary characters more than for the saccharine love story, which suffers the melodramatic tendencies of its time. ( Vitor, especially, is a pill). If the book was never published during the author’s lifetime it is perhaps because the tragedy of the title is somewhat asthmatic, wheezing in late and immediately expiring, but even as a literary curiosity, The Tragedy of the Street of Flowers is a fascinating visit to a period with a very different approach to morality, both more structured in its minutiae and more chaotic in its general form. The translation is extremely readable, neither annoyingly modern nor embarrassing archaic, although readers are strongly advised to skip the translator’s introduction, which gives away the story.

Tadzio Koelb in The Guardian

A previously unpublished novel, not quite completed before the death of the great Portuguese realist (1845–1900), that appeared in Portugal in 1980, over the objections of Eça’s heirs. It reads like a finished book similar in scope and narrative authority to such Balzacian marvels as The Crime of Father Amaro and The Maias. The depiction of Lisbon hoi polloi aping the manners of Parisian sophisticates stings bracingly, but the central plot—an incestuous love affair seeded with doom for all involved and in its wake—obviously explains the novel’s undeserved notoriety. A significant addition to a magnificent—and still inexplicably underrated—body of work.