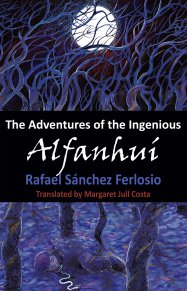 In his dedication, Ferlosio describes this exquisite fantasy novel, first published in 1952 and now beautifully translated into English as a 'story full of true lies.' Much honored in his native Spain, Ferlosio is a fabulist comparable to Jorge Borges and Italo Calvino, as well as Joan Miro and Salvador Dali. Cervantes comes to mind. Ferlosio's prose is effortlessly evocative. A chair puts down roots and sprouts 'a few green branches and some cherries,' while a paint-absorbing tree becomes a 'marvelous botanical harlequin.' Later, Alfanhui sets off on a tour of Castile, meeting his aged grandmother 'who incubated chicks in her lap and had a vine trellis of muscatel grapes and who never died.' This is a haunting adult reverie on life and beauty and as such will appeal to discriminating readers.

Trees with feathers for leaves, birds with leaves for feathers, lizards that turn into gold, rivers of blood and transparent horses - these are just some of the magical occurrences in this enchanting fairytale. This book of wild ideas and true lies is a kaleidoscopic celebration of the natural world, and a poetic parable on the passage from innocence to experience.

...what keeps things moving are the vivid imagery, and the truly fantastic wonders described so vividly. A strikingly different sort of fantasy, more for fans of the surreal and magical realism than of the usual genre.

A boy's adventurous quest for knowledge is the subject of this classic 'children’s fantasy for adults,' the first (1952) and most famous novel produced by an eminent Spanish author later better known as an essayist and linguist. The resourceful Alfanhui — part Candide, part Tom Swift, and just possibly an ironic Christ figure — is an apprentice scientist and magician whose picaresque adventures in urban Madrid and rural Spain are simultaneously acts of creation (such as 'creating water out of light'), healing, and homage to the inexorable mysteriousness of the physical world. A highly unusual novel, and a thoroughly engaging one.