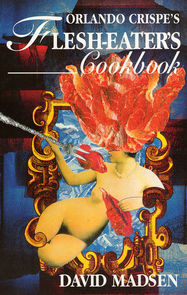 Without question David Madsen's Orlando Crispe's Flesh-Eater's Cookbook is the most bizarre tome to land on any food editor's desk this year. Conveniently categorised as Fiction/Cookbook/Decadence by his publisher, Madsen offers up something akin to Hannibal Lecter's kitchen through the eyes of film director John Waters. Amid the seemingly straight recipes are some quite queer ones, involving the use of precious bodily fluids and marinades. The least bizarre technique involves chef Crispe bathing in beef stock.

An unusual one this, a book that celebrates the art of cooking meat.For Crispe, no amount of preparation is too insignificant to be recounted. He even gives the recipe for Beef Stock au Orlando Crispe, which requires marination for several hours in the bath with its chef so that it can mingle the juice of the cow with that of its creator. So, not really a cookbook, more a philosophical statement ; extravagant, shameless and entertaining. Vegetarians beware.

Fergus Crow in The Latest Magazine

More decadence from Dedalus, this being a work of philosophy as much as a book of meat recipes. Some of the dishes require things like '2 teaspoons of the chef's sweat' or '1 tbsp freshly-ejaculated sperm'.

Dedalus specialises in books about decadence, and a recent addition to its wonderfully singular list is Madsen's droll Orlando Crispe's Flesh-Eater's Cookbook.

Peter Burton in The Gay Times

Even Hannibal Lecter would be shocked by the fetishistic culinary and sexual exploits of the Thursday Club, as documented in Orlando Crispe's Flesh-Eater's Cookbook by David Madsen ' It is the destiny of the lesser to be absorbed by the greater ', opines cannibal-chef Orlando, ringleader of the group of kinky, upper-crust weirdos who form the club. Recipes and gossipy anecdotes intermingle, as do bodily fluids ( think sauces and marinades) and more conventional ingredients. Cerebral, campy and often hilarious, but definitely not for the squeamish.