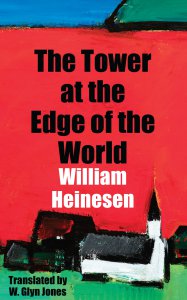 IN THE DAYS WHEN THE EARTH WAS NOT YET ROUND BUT HAD A BEGINNING AND AN END, A splendid tower could be seen at the furthermost edge of the world.
During the daytime an endless procession of clouds floated slowly past out there in the void under the eye of the sun.
At night, the tower shone out and competed with the Northern Lights and the stars over the void, for it was a tower of light.
On clear evenings you could see the tower's beautiful light shining out in the darkness over the sea, and then you could be caught by an irresistible urge to reach this shining tower rising in isolation out there towards the vast unknown areas where the world ends and begins and the Spirit of God hovers over the waters.
It was in the far-off time of beginnings, when you still didn't know that the magical light from the tower was the light from a quite ordinary lighthouse, a work of human hands and ingenuity, a useful and sensible provider of light whose task it is to be a guide for those sailing the seas.
And it was also before you yet knew that the Earth is a star among other stars in an inconceivable gulf of time and space, and that you yourself are a star dweller.

Yes, the Earth with its lighthouses and ships, islands and lands, cities and peoples, is a star, one of the many beautiful radiant heavenly bodies in the firmament.
But you don't know that yet, for you are quite new to the world of words and for the time being you must cope with sounds and images as best you can.
You are at the restless but delicious focal point of your beginning. It’s early spring, and you are lying in your bed, new in time, unknowing, but filled with immense intimations.
There you lie, listening to the Evening Horn.
The Evening Horn, that's the sound made by the golden stripe in the sky, over there where the sun sank into the sea.
It’s a big, happy bird cackling and clucking.
It’s the Evening Bird.
No, it's the Ferryman sitting out there on the rocks outside his house, blowing his horn.
The Evening Bird clucks and cackles in the Ferryman’s horn. The yellow line in the sky is his horn. There‘s a quiet lapping sound of happily rocking waters in his horn.
Then twilight comes. Then darkness comes. Then the horn falls silent.

Then night comes.
Night rests on all roofs.
Night twinkles in all windows and in the pools of rain on the lids of the blue paraffin drums.
Now everyone is slumbering in their bedrooms, where sleep flowers float down in the darkness.
The distant sound of star drops falling from the heavens can be heard in the silence. The sound echoes throughout the vast vault of heaven.
The sound is the only sound in Heaven and on Earth.
It's only the sound of a tap that hasn’t been turned properly off.
The dripping tap is alone, alone in the world.

There are no beams spanning the heavenly loft.
There is an empty bed in the garden outside the Old Man’s house. It is made of wood and has recently been scrubbed. It is to stand there and dry in the sunshine, but there is no real sunshine, for the Old Man is sitting on the edge of his bed smoking his pipe, and in the huge cloud of smoke the sun turns red and dull.
The Old Man sits looking up at the heavenly loft, where the smoke gathers in great clouds.
Finally, there is no cloud to be seen either, just smoke and mist.

Both the bed and the Old Man are gone in the evening, and the sun is shining beautifully on the Old Man's roof now.

The words come flying in. Or they drift down quite gently. Or they fix themselves on the windowpane in the shape of raindrops or ice flowers.
The words stand there like flower bulbs in vases, covered by grey paper cones. Then one day the cones are gone, and that means the sweet-smelling hyacinths and tulips are on their way.
Hyacinth and tulip are the loveliest of words. You never tire of saying them and playing with them. 'Tulip and hyacinth, hyalip and tulicinth - citilip - hyatul - tulihy.'

The world is vast.
It is made up partly of land and partly of water, but mostly of water. Wherever you turn your eyes, you can see water twinkling somewhere or other and you can hear the sound it makes, and sometimes you can even stand there and see God floating over the waters like a shining cloud.
But there is a lot of land, too, with mountains and valleys.
Far towards the north there is the heath with its heather-covered hills and busy babbling brooks, some of them babbling in the darkness under the ground. Even further away to the north, where the sun sets in the summer, stand the Faraway Mountains. The highest of the Faraway Mountains has a flat top. That is God's floor. That is where He rests when He’s tired of floating over the waters out in the abyss.
God’s Floor is set with grey tablets of stone that are swept and scrubbed clean by the wind and the rain. Somewhere among the stones there is a big grey expanse of moss filled with little pink flowers. That is God's pillow.
God’s tablets are full of writing.
God stands on his stone floor and looks out over the world during the white nights. 'His eye seeth every precious thing'.
Then he kneels down and fills the big tablets with writing.

There is no night during the summer. So it's always light, and the world is filled with Summer Girls.
You can hear them laughing and singing everywhere - in living rooms and kitchens, on stairs and in doorways, in the wind down by the shore and out on the billowing fields.
They are always there with their hair and their clothes and hands that smell of pencil or salami or of tansy and cress.
The summer girls sit swinging their big legs on swaying branches. They walk on stilts. They play hide and seek among fences and outbuildings. They sit on the edges of ditches and thread flowers on strings. They look at picture books. They make little fans of pictures on the walls above their beds.
They sit and sing by your bed in the evening.
One of them comes to you only when you are asleep. Suddenly, she is there, staring at you with big eyes. She doesn't speak; she doesn't touch you; she simply stares.
You have to go with her, floating low over the earth, through streets that are deserted at night, across stretches of heather and gently whispering waters and into the pale heavens far away at the End of the World, where the Tower stands.

The Earth isn't round yet and God has still not established a borderline between dreaming and waking or between fleeting shadows and living persons.
Down in the coal cellar’s everlasting night sits the Earth Girl Lonela. She is only to be seen for a brief moment just as we go down with the torch to fetch coal. There she is, sitting in the corner, and behind her there is a host of grey faces and hands. These are all the other earth girls who live down here.
Then they all vanish, and where the Earth Girl Lonela was there is nothing to be seen but the shadow of an old notched piece of driftwood.
But then for a moment you have seen how she sits staring at you, for she knows you well.

The Earth Girl Lonela and all the other earth girls live in the dark beneath the house and they never see the light of day, for they are dead.
The Earth Girl Lonela has big night eyes. She sits there longing to go up into the daylight, but she has to stay down in the dark.
Who is the Earth Girl Lonela?
Perhaps a girl who once lived in the house long ago. But then one evening she was gone. Her parents searched high and low for her, going around lighting up the darkness with torches and lamps, but all they could see was the old tree root and its shadow. Lonela could see her parents all right. But she had to stay where she was, for she was dead.

On Judgement Day, when the trumpet sounds, the whole house will collapse with a great din, and the cherubs will come with their flaming swords and split the old tree root.
Then the dead will come back to life. Then Lonela and all the other pale earth girls will come milling up out of the ground and float into the light and the day.
But the Earth Girl Lonela isn't so dead that during the night she can’t creep up out of the coal cellar into the hallway and further up the stairs into the loft and the bedroom where you lie dreaming. Then you know that she has come to fetch you and that the two of you are going out to float. Out to float on great wings, over sea and over land, all the way to the End of the World, where the Tower stands.