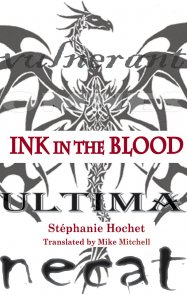 Fads and fashions: a tribal bracelet, stars, surnames (Beckham, Scarface, Soprano…)
Chinese characters on your neck – avoid the neck if it’s your first time.
Guns: liner, shader, magnum. A noisy or a silent machine. Ink. The quality of the blacks. Pure pigments, dense black, its scarcity justifying the price. Ink capsules. Gloves. Dettol, alcohol. Cellophane.
On your stomach, feeling like being sick.
Your ribs are so sensitive you can’t think. Ankle, collar-bone, solar plexus, elbows and armpits: unforgettable pain. The feeling that a fingernail is scratching you, slowly. The burning sensation brings to mind a well-known, stainless-steel instrument with a precise cutting edge: the scalpel… The most painful part is filling in, colouring the space between two lines dot by dot. It is advisable not to have it done on an empty stomach.