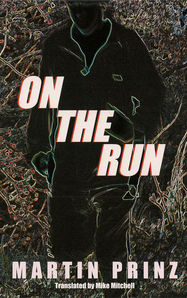 In November 1987 Rettenberger held up the Raiffeisen Bank in Gross-Sierning, east of Melk. This time he stayed in the car just for a moment, to gather himself. The mask was in his army-surplus anorak, the gun and the sports bag for the money were ready. He must not hesitate, must dash into the bank with the gun, shout, 'Give us the money' and drive off as quickly as possible. Rettenberger knew the town. He had grown up only fifteen kilometres away. He took one more deep breath, observing himself as he slipped effortlessly into the movements of the great bank robber. With that breath he was the robber and the others were afraid of him. He picked up the gun and the bag as if they were the most normal tools in the world, put on the Ronald-Reagan mask and went into the bank.
The first thing the customers at the counter noticed was the shotgun. They hardly registered the mask, only the sawn-off shotgun. At once it's quiet and Rettenberger goes to the counter, growls, 'This is a hold-up! Give us the money,' in as indefinable a Viennese accent as possible, indicating his sports bag with the gun. He is in control. The cashier shoves money across to him, Rettenberger sweeps it into the bag, keeping his gun on the people round him. It's all calm.

At last it started to get dark. Rettenberger searched the house for more clothes. He had to get himself kitted out for going on foot. Presumably there would have been reports about him on the radio and television, and anyone seen on the roads or going across the fields in light city clothes would immediately attract attention. He did not switch on the news, even though that would have told him more about his pursuers. He was sure the reports would just describe him as a murderer. He did not want to hear that, not even, when it came down to it, where the police were looking for him. It would be better for him to concentrate on his escape, he would show them what stamina he had. For going on foot he needed warmer clothes, and after only a brief search he was cursing the owner of the house for being so much shorter and fatter than he was. Finally in the cellar he found an old, reddish-brown leather jacket with a thick astrakhan collar and a black woollen cardigan which more or less fitted. He couldn't find any stronger shoes anywhere, but he was happy enough for the moment, at least he could hide his face in the collar, which would surely not strike anyone as strange in this weather.
Rettenberger also pocketed a penknife, the last pieces of bread and some Dextrosol he found in a coat pocket. He eventually decided that putting on a hat, or one of the fur caps, of which there was no shortage there, would be going too far. He climbed out by the window he had used during the night and set off through the woods to try and find a road.
One of the few people he passed in the rain on the main road to Sittendorf must have thought him suspicious. Shortly afterwards a car drove past, so slowly it looked as if the driver was trying to avoid splashing him. But after it had passed him it did not accelerate. Rettenberger knew straight away what was going to happen. Years ago, before running became fashionable, cars had overtaken him like that, the amused or astonished faces of whole families turned towards him as they slowly drove past. The two men in the car, however, had not looked at him at all. They obviously knew whom they were dealing with. Rettenberger kept walking, he must not stop. Perhaps that would disconcert them slightly. Then the car stopped beside him. Two policemen leapt out, but when they asked him his name it was in friendly tones. Rettenberger answered without hesitation, 'Hartmann, Gerhard Hartmann, Herr Inspektor,' and immediately, even as the officer said 'Well, Herr Hartmann, would you mind putting your hands on the roof of the car?' he really was Herr Hartmann and laughed silently to himself, as he put his hands on the car roof, so little fear of them did he feel. One of the policemen frisked him, the other asked, 'Haven't you got your identity card on you, Herr Hartmann?'
'No,' Rettenberger replied in the same friendly tone, 'I've just arrived and wanted to stretch my legs. I left my wallet in the inn where I'm staying the night.' The two policeman looked at each other, unsure what to do, so he went on to say that he would quite understand if they insisted on driving him back there. 'After all, I've heard about the escaped criminal.'
As if on command, the two policemen, in apparent agreement with his suggestion, turned away. Rettenberger, still with his hands on the car roof, whipped round, knocked the gun out of the hand of one of the policemen, snatched it up and ran off across the fields.

A large-scale operation during the night producing no result, at six o'clock on Monday morning the police set in motion what was must have been the largest manhunt in years. The wooded area around Sparbach was surrounded by almost three hundred police officers, including thirty-five dog handlers and two helicopter crews.
Soon after Rettenberger's second escape, the sound of a gunshot was heard in the forest. However, he had not committed suicide, but was clearly just testing the gun he had taken from the officer. Along with the FN pistol, the criminal acquired thirteen rounds of ammunition.
Following this, the police hourly expected to hear of a car being stolen, a bank robbed or a hostage taken by Rettenberger as the net closed in on him. Already questions were being asked in parliament about the suspect’s escape from a police station and about the security of the building. Despite the neat piece of police work that had led to Rettenberger being stopped near Sparbach, the officers who had let Rettenberger get away were threatened with disciplinary proceedings, since one had clearly stood in the other's line of fire.