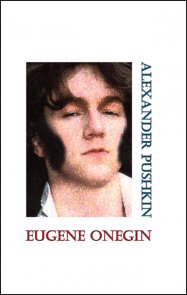 'My uncle's acted very wisely,
to seek his bed when he's so sick;
his family's reacted nicely
and he's most happy with his trick.
He's set the world a good example,
which others would do well to sample,
but it's a bore, when night and day
the sick man forces you to stay!
To keep him sweet, as if he's dying,
give him his daily medicine
and make quite sure that it goes in,
adjust the pillows while one's sighing:
'Don't even think of getting well,
The devil take you, go to hell!'"

Thus thought a ne'er-do-well and dandy
whom Zeus had made his uncle's heir:
to him the money'd come in handy,
so coach and horses rushed him there.
For those who love my comic thriller
of Ruslan and his dear Ludmilla,
I'll introduce without ado,
the hero of my tale to you:
Onegin, whom I've long befriended,
had grown up on the Neva's shore,
perhaps like you, dear reader, for
St. Petersburg is truly splendid
where once we wandered back and forth,
though now I really hate the North.

That year the warm and autumn weather
appeared to wish that it could stay,
and nature dawdled, altogether
reluctant ever to make way
for winter; suddenly some flurries
of shining snow arrived and hurried
to cover fences, houses, lanes,
drew patterns on the window panes.
Tatiana wakes and sees the whitened
and gleaming countryside; the trees
in wintry silver, magpies please
her eyes, the hills around now lighten
as swirling snowflakes gently float,
enclosing all in winter's coat.

So now it's winter-time! The peasant
sets off, rejoicing in the day,
his horse, in snow both crisp and pleasant,
is snorting as it drags the sleigh,
while fleet kibitkas glide for hours
and throw up fluffy, snowy showers;
the coachman drives with proud panache
in sheepskin coat and crimson sash;
a country urchin blithely scampers
along and pulls his little sled
on which a mongrel sits, instead
of him; he laughs at frozen fingers,
inflamed in all the biting cold,
not caring as his mother scolds.

Pursued by springtime's warming sunshine,
the snow is chased from off the hills
and runs in swelling streams through alpine
escarpments where they swirl and spill
on inundated fields and meadows.
Now tranquil Nature, sleepy, mellow,
salutes the morning of the year;
the heavens glisten, blue and clear,
the yet translucent trees are growing
unhurriedly, a downy green,
the bees amidst the flowers glean
their tribute while the herds are lowing;
the earth grows dry and nightingales
delight the silent, moonlit vales.

How sad my spirit at your coming,
oh Spring, love's season, blissful Spring!
What throbbing agitation, flooding
both turbid blood and soul, you bring!
With what a tender, drowsy feeling
I bask in spring's sweet fragrance, reeling,
as in the lap of rural calm
it fans my face with glowing balm!
Or is all happiness a stranger,
is everything that gladdened me,
all radiance and ecstasy,
now dull and wearisome, a danger
to soul and spirit long since dead,
which darkens all it sees with dread?

When winter's past, do we remember
some bitter loss, not overjoyed
that leaves which mouldered last November
are here again? Are we annoyed,
as breezes whisper through the woodlands,
at our so transient existence
to which we never can return,
unlike the spring for which we yearn?
Perhaps while we are lost in musing
on loveliness, the thought might come
into our brooding mind of some
departed, former spring, suffusing
our hearts with dreams of distant climes,
of moonlit nights and wondrous times....