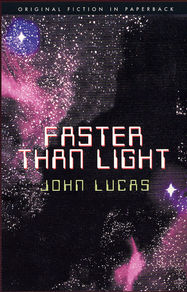 Dreldor is not a planet noted for its natural beauty or historical sites.
It has no spectacular wildlife, and its half-derelict cities contain little
in the way of notable architecture. Its sizeable tourist industry is based
on one thing and one thing only, namely, its drinking places. These shabby
and unassuming little bars are justly famous for the baffling variety of
cocktails they serve, most of which are either unknown or banned on other
planets. Creatures of all shapes and sizes make the pilgrimage from
neighbouring star systems to sample them. And, fortunately, most of them
remember the one vital rule that anyone visiting Dreldor should follow.
That is, never drink anything without first reading its list of ingredients
very, very carefully.

The reason for this is that Dreldor's bar staff regard alcohol alone as an
entirely inadequate base for a cocktail. After all, those races with a
taste for serious partying have long since evolved livers that break it down
as fast as they can drink it. The planet's scientists and cocktail waiters
have been experimenting for centuries with solutions to this problem, and
they now have at their disposal an astonishing arsenal of intoxicating
substances. Compounds that most civilised races would hesitate to use even
as chemical weapons are freely available, mixed with local fruit juices and
served with the Dreldoran analogue of an olive.

Sadly, in all the excitement of landing, Jones had neglected to mention any
of this to Alex and Jason. Eagerly they gulped down their randomly-chosen
drinks, their minds untroubled by even the tiniest inkling of the possible
consequences.

"Mine tasted a bit like chocolate," said Jason. "Cold, gritty,
throat-burning, eye-watering chocolate. It's pretty strong stuff, though.
Everything seems to be going round and round, and I'm not sure I can feel my
legs any more."

"You're lucky," said Alex. "Mine's not having any effect at all."

"Who's there?" asked Alex, looking around in confusion.

"I'm your drink," said the voice. "In the past couple of seconds, I've
colonised every cell of your body, analysed your metabolism, and learnt your
language. And now I'm ready to provide you with whatever mind-altering
experiences you care for."

"There's no need to talk out loud," said the drink. "It's unnecessary,
because I can read your mind, and it's causing your companion to worry about
you."

"I've always regarded drinking as a fairly straightforward business,"
thought Alex. "You spend a few hours relaxed and happy, in return for which
you feel like shit the next morning. All my previous drinks have seemed to
understand that. They haven't started talking back, or analysing my
metabolism."

"You're referring to old-fashioned low-tech drinks. Mere combinations of
intoxicating chemicals. I'm much more than that. I'm a highly intelligent
organism in my own right, albeit an artificially constructed one."

"I don't want my body cells colonised by an artificially-constructed
organism," said Alex. "Go away. I don't want you."

"In that case you were extremely foolish to drink me," said the drink. "You
didn't even think to negotiate a fixed-term tenancy agreement, which means
I'm legally entitled to inhabit your body for as long as I see fit."

"This is awful," wailed Alex out loud. "I've had drinks disagree with me
before, but this is the first time one's tried to claim squatter's rights.
What should I do, Jones?"

"I don't know what to suggest," said Jones. "Other than being a lot more
careful what you drink in future, of course."

"A fat lot of help you are," hissed Alex.

"You really should try to be more positive about what's happened," said the
drink. "You'll find there are all manner of advantages to sharing every
cell of your body with an organism such as myself. As well as my primary
function of manipulating your moods and sensations in whatever way you
desire, I can also monitor your body for signs of disease, and make minor
repairs and modifications. Have you ever thought about experimenting with
new limbs or sexual organs?"

"There's no need to get upset," said the drink. "It was only a suggestion.
The important thing for both of us now is to stay calm, and try to establish
a modus vivendi. As long as you're reasonable, and allow me a fair share of
access to your body, you'll find me a most reasonable tenant."

"Access to my body?" protested Alex. "What on earth are you talking about?"

"It would hardly be fair for me to remain a passive observer all the time,"
pointed out the drink. "We'll have to swap roles now and again. You can
take the back seat for a while, and I'll use your body to pursue my own
interests."

"What sort of interests?"

"Just the usual social things. Going to the cinema, playing tennis, having
sex with the hosts of other drinks."

"No way!" said Alex, turning round to find Jason, and discovering to her
dismay that he was slumped unconscious at the foot of bar. A thin stream of
blood was trickling from one corner of his mouth.

"Oh shit," said Alex, bending down to examine him. His face was pale, and
he barely seemed to be breathing.

"Don't worry about him," said the drink. "It's just a mild case of
benzylite poisoning. As long as he remembers to drink plenty of water
before he goes to bed, and books himself in for a liver transplant first
thing in the morning, he'll be as right as rain."

"Get real," said Alex. "Can't you teleport us, or something?"

"I'm afraid you've been watching too much science fiction on TV," said
Jones. "Transporting even a single subatomic particle over any distance big
enough to notice is a major technological headache. Transporting a whole
person is practically impossible, particularly if you need them to be alive
when they get there."

"How about the Insti-Med module?" said Alex, searching her bag for the small
black cube Jones had given her.

"I fear it will be of little help," said Jones. "It just wasn't designed
with the peculiar drinking habits of the Dreldorans in mind."

"Oh no," said Alex, resting her head in her hands. She suddenly felt very,
very lonely, and a long way from home. "What am I going to do?"

"Excuse my intrusion," said a voice behind her. She turned, and saw a
Dreldoran, dressed in elegant orange robes, his face exhibiting the fixed
scowl she knew from her guidebook to be the equivalent of a smile. "I'm
Drax Warford, the well-known socialite and television celebrity. When I
heard on the grapevine that aliens of an entirely unknown species had landed
on our dull little world, I simply had to come and meet you. Would you
permit me to buy you a drink?"

"Don't trust him," said the drink. "Whatever he's up to, you're best off
having nothing to do with it. Drax Warford is the sort of man who gives
ruthlessness and greed a bad name."

"Normally I'd love to," said Alex, ignoring her drink. "But the fact is
we're otherwise engaged. My companion is suffering from some kind of
poisoning, and I have to get him back to our ship."

"What a terrible thing to happen," said Drax, sniffing cautiously at the
dregs of Jason's drink. "The barman really shouldn't have served him one of
these. I'd imagine a single mouthful would be more than enough to cause
permanent damage to anyone who lacked the Dreldorans' highly-evolved triple
liver."

"There must be something we can do," said Alex.

"If you wish, I'll summon my personal physician," said Drax, reaching for
his communicator. "I'm sure he can prescribe an antidote."

"Not at all," said Drax, bending down over Jason, and shifting his
unconscious body to a more comfortable position. "The important thing now
is that you should try not to worry too much about your friend. Why don't
you tell me what you're doing here on Dreldor, while we wait for Dr
Weissland to arrive?"