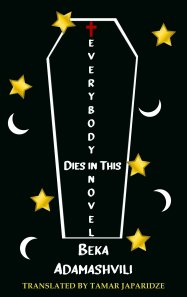 Everybody Dies in this Novel

One day Mr. Memento Mori realises that he is a book character and has a superpower to travel into books and so, he decides to strike against the evil writers who sentence their characters to death. Mr.Mori persuades Romeo and Juliet that suicide is not a solution and in their adulthood, they will remember these days with laughter. He goes to The Magic Mountain with a huge supply of penicillin. In reverse Mr. Mori pushes Professor Moriarty at Reichenbach Falls and kills him in order to save many other characters.
But everything turns upside down when Mr.Mori discovers that in the book where he is the character the author decides to kill someone. He has no information about the victim so Mr.Mori gathers all the characters and with the help of H. G. Wells' time-machine starts a journey to different epochs. As time changes, the genres vary so the power of the author becomes limited outside the post-modern world. Mr. Mori knows it and selects the direction where the characters have bigger chance to survive.