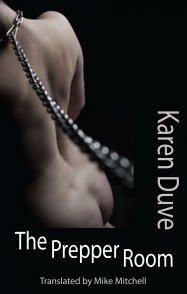 The year is 2031 and all the dire predictions of environmentalists are coming true: extreme weather bringing storms, floods and intense heat; and the genetically modified 'killer rape' is rampant everywhere. A rejuvenation pill has been developed but no one is going to enjoy eternal youth for long: the experts forecast that the world's ecosystems will collapse in five years' time.
Women have taken over power to try and save the world from the mess men have got it in. But there is opposition in the form of the MASCULO movement that is aiming to reassert male power by violent means if necessary. At the same time apocalyptic sects are proliferating.
Sebastian, the central figure in this novel, appears to be one of the good guys, a Greenpeace activist in his youth, he now has an important position in the Democracy Centre. But in his private life he is attempting to restore his male pride: for the last two years he has kept his wife locked up in the cellar. But his attempts to do away with her so he can live with his new love lead to disaster

A hugely entertaining novel about feminism, masculinity and the battle between the sexes for domination which is full of grotesque humour and highly-charged eroticism.