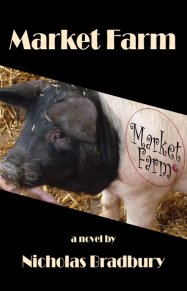 Market Farm is a Swiftian satire on the untrammelled free market thinking that helped usher in the current financial crisis. In its concept, it pays homage to George Orwell’s Animal Farm and engages the reader in an amusing way with the causes and likely outcomes of the crisis we are all facing. The story follows the fortunes of three characters: Erroll, a bull who is an eternal optimist; Merlin, a donkey who is a down- to-earth pessimist; and Lily, a chicken who is largely timid and confused.

While focusing on the damage wrought by the financial crisis, Market Farm examines its deeper causes and takes passing swipes at other problems of modern life. These include the cult of fine food, the rise of the welfare state, pollution, obesity, social disorder, the domination of the political process by the media, and even the rise of the internet and phenomena such as Twitter.