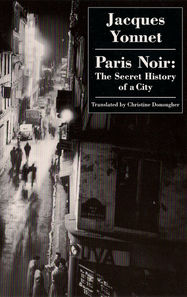 Paris Noir: The Secret History of a City

In Paris Noir Yonnet tells us about some of the darker quarters of Paris on the left bank of the Seine, centred on the place Mauberge and the rue Mouffetard, as seen from his own
experience.

It is mainly written during the 1940s, under the Occupation and in the immediate post-war period; there is a certain amount dealing with the resistance, but the main thrust of the book is a Paris that existed between the wars - and is well known from the film noir -but has since disappeared. It concentrates on the people, rather than places, a mixture of ordinary workers, tradesmen, artists, con-men and criminals.

Paris Noir will appeal to lovers of the supernatural and the bizarre. Essential reading for visitors to Paris who want to get beneath the skin of the city.