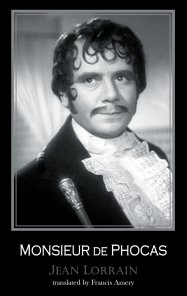 Monsieur de Phocas ranks with A Rebours as the summation of the French Decadent Movement. Modelled on The Portrait of Dorian Gray, it drips with evil and certainly would have unpublishable in fin-de-siecle England.

'With Ethel’s friends, grotesque, ageing decadents, Phocas for the first time tastes opium. He experiences the pleasure of absolute degradation, and the double pleasure of being both observer and observed, dominant subject and passive object. As the opium takes effect, the naked Javanese dancers at the orgy vanish in a swirling cloud, to be replaced by a dark lamplit street where two thieves carefully saw at a woman’s throat with a delicate knifeblade. From this cruel vision, Phocas soars into dizzy flight from which, suddenly, he plunges to destruction, into oozing depths where clinging vampires suck his blood, until he almost swoons into spasms. The mysterious, vicious double is on the threshold of existence: Phocas sees himself as Giles de Retz in the forest of Tiffauges, haunted by obscene desires.
Jennifer Birkett in Sins of the Fathers