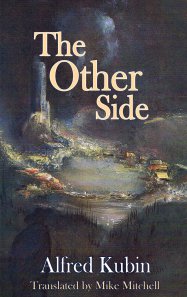 The Other Side tells of a dream kingdom which becomes a nightmare, of a journey to Pearl, a mysterious city created deep in Asia, which is also a journey to the depths of the subconcious, or as Kubin himself called it, 'a sort of Baedeker for those lands which are half known to us'.

Written in 1908, and more or less half way between Meyrink and Kafka, it was greeted with wild enthusiasm by the artists and writers of the Expressionist generation. Franz Marc called it a magnificent reckoning with the 19th century and Kandinsky said it was almost a vision of evil, while Lyonel Feininger wrote to Kubin. 'I live much in Pearl, you must have written it and drawn it for me'.

It will appeal to fans of Mervyn Peake and readers who like the darkly decadent, the fantastic and the grotesque in their reading.